As part of the current updates on the Feisty ‘n Free Wholistic Living blog and its accompanying Facebook page, I thought it would be helpful for me to share my health story and the life events that propelled me in pursuing a more wholistic lifestyle. 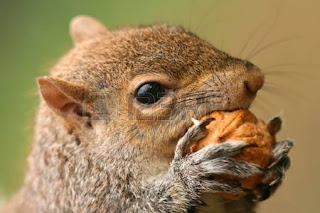 I believe humor is great medicine!  The moment I was putting some thought into writing this post, the image of a squirrel with a nut came to mind.  My husband and I have an ongoing joke in our home office about me “chasing squirrels”.  On any given day, I’ll be doing online research and study on a particular topic which then leads me to another and another and pretty soon, I’ve totally derailed from the original topic which I was researching and from my list of goals to accomplish that day!  So I find this cute picture of a squirrel with a nut totally appropriate to complement this post.  Sometimes, I’m a little nut.  And sometimes, I like chasing squirrels that are carrying little nuts. :-D

This writing will be an attempt on my part to give a brief overview and background on the health issues I have faced over my life and especially the past 15 years.  These have been the driving factors for me growing an immense passion for wholistic living and for pursuing alternative health and healing methods.  I will do my best to keep my story as brief as possible and to the point.  I started write this thinking it could be one post, but the more I wrote (even trying to be brief), the more I realized it would be best to turn it into smaller bite sized pieces.  I’ll post each part on upcoming days.

PART 1 - EMOTIONAL TRAUMA AND BACK PAIN

As a child, teenager, and young adult, I was a fairly healthy person… As a little girl, I picked up impetigo (that’s some really nasty stuff!) from a playground and had my face scrubbed raw in efforts to eradicate it.  While playing a foolish game at that same playground, I busted my forehead open on a wooden swing which required a trip to the ER and butterfly stitches.  At another time, one of my childhood friends slammed an iron gate against my ankle, and I walked around with tiny broken ankle bones and pain for at least a couple of years before the problem was discovered and remedied with surgery.  At 12 years old, I finally came down with a terrible case of the chicken pox at the same time a beloved friend had died and was being buried due to Cystic Fibrosis.  And at 14, I was an emotionally stressed out teenager which led to gastritis (inflammation of the stomach) and spending a night and day at a hospital by myself while all kinds of unpleasant tests were done on my body.

Throughout the subsequent years, there were a number of particularly memorable and emotionally painful events that occurred in my life which hitched a very long ride in my heart and soul through adulthood.  We can all relate to such a common phenomenon.  No human is immune from physical or emotional trauma.  Ultimately, it is in how we respond to trauma that makes a difference.

Fast forward many years to 1999, I began to homeschool my children and the new friends I made began to introduce to me to the concepts of added hormones in milk, the importance of organically grown foods, and why our family could benefit from adopting healthier eating habits.  It was a very hard pill to swallow at first because I hardly understood the full implications at that time.  I only dabbled around with practicing it, occasionally buying organic lettuce, milk, and strawberries.  We were on such a tight budget, and it seemed like too costly an expense to undertake.  At that time, finding decent organic produce at the store could prove to be very difficult.  Plus, comfortable, old habits die hard; especially, when there isn't immediate and urgent need to change.

In January 2001, my husband, three children (ages 11, 7, 5), and I faced an unexpected move to another state.  The whole process of the move that had begun many months earlier was emotionally agonizing for me as I lost friends and uprooted from the city and home my children had been growing up in since they were babies.  After experiencing a harrowing drive with a rear wheel drive Suburban pulling a U-haul trailer through an Oklahoma snow storm, we arrived in Colorado grateful to be alive and well and excited for new adventures.  Though deep within, I wrestled with (and tried to ignore) a great deal of emotional pain and heavy baggage relating to repeated life events of rejection, abandonment, and feeling unworthy and invaluable to others.

Months after our move to Colorado, I made a very special friend who became a regular inspiration to me on the importance of eating healthier, how food definitely affects our body's health and wellness, how food allergies can make the body really sick, and how I could build my own garden and grow my own organic food.  Her presence and example in my life has been so important along this wholistic journey.  Thanks to her I explored the wholistic life with much more interest, learned bit by bit, and fell in love with growing my own food, reaping many benefits from that therapeutic practice.  Thank you, my dear friend.  You know who you are.

By sometime in 2002, I had begun suffering from intense back pain.  I thought it was only due to sitting on the floor with my body all scrunched up intensely while doing my daily journaling, so I bought a desk.  The back pain continued to worsen even when I sat at that desk to write or work at the computer.  I lived like this for years and years with awful back pain and tendonitis in my wrists, forearms, and elbows. On some days the back pain was so terrible and debilitating, I would lay down on the bed in tears because I was unable to find relief.  Over the years, I went to see the doctor about the pain, was sent to a specialist who only told me I was hyper-mobile, and even had a complete MRI that revealed nothing of particular interest.  Deep down, I felt that my back pain was related not only to sitting for extended periods of time but also due to my emotional pain.

My Health Story in a … (Big) Nutshell? is continued in Part 2, Colitis and Emotional Trauma
Posted by MaryAnn Broussard at 2:21 PM